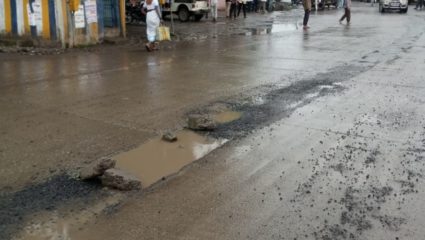 himself: The BJP members were enraged after a youth died due to a road under construction in Diwa campus. BJP blames construction of substandard road in Diwa. Diva BJP representatives led by Thane City District President Niranjan Dhavgare met Thane Municipal Commissioner Dr. Vipin Sharma and submitted a petition. It was urged that a case of murder should be registered against the guilty contractors and officials.

Action should be taken against the concerned contractors and officials

The letter states that substandard road construction is going on in Ganesh Nagar, Bedekar Nagar and Agasan areas of Diwa. With this the work is half done. Due to this, a young man died after getting stuck in a pothole on the road during the last Ganeshotsavam. Regarding the youth’s death, the delegation has requested Thane Municipal Commissioner Dr. Sharma to inquire into the entire matter. Most importantly, there should be an investigation into the delays and garbage in the construction of the road. Apart from this, action has also been taken against the concerned contractors and officials as the Agasan road has not been constructed within the stipulated period. At the same time, apart from Thane City District President Niranjan Dhavgar, Diwa Mandal President Rohitas Munde, Thane City Executive Committee Member Ashok Patil, General Secretary Sameer Chavan, Mahila Morcha President Jyoti Patil, Roshan Bhagat, Sapna Bhagat, Nagesh Pawar and others were present in the group. .