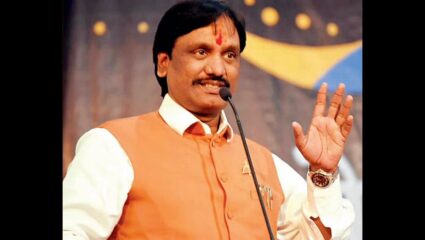 Nashik: Leader of Opposition in Legislative Assembly Ambadas Dhanve said, “There was an understanding that many offices located in Mumbai would be shifted to the capital, but they were shifted to Ahmedabad in Gujarat. It simply means that. BJP has only hypocritical love for Marathi community. Work is underway to de-emphasize Mumbai and crown Ahmedabad.

The ghosts visiting Nashik gifted the damaged village of Vanjarwadi. During this, he himself condemned the authorities regarding the loss of the farmers. Immediate assistance has been ordered. Appeal to government ministers to take agriculture to farmers instead of bullet train projects. He made strong comments about Union Home Minister Amit Shah’s visit to Mumbai. Amit Shah comes to Maharashtra to see Ganapati Baba, but his Mumbai romance is just a show. He further said that the Maharashtra society is overcoming all the problems. Commenting on BJP leader Ashish Shelar, Dhanve said, “What and how is the Shiv Sena will be answered in the coming elections.”

The Maha Vikas Akadi government in the state continued to make efforts on many issues, but the governor was not interested in it. Now that Shinde-Fadnavis has come to power, the remaining 12 MLAs are talking about finalizing the list. This shows the vigilance of the Governor. Decisions which used to wait for two years during Mahavikas agaya are now taken in two to three minutes. That’s the big thing.