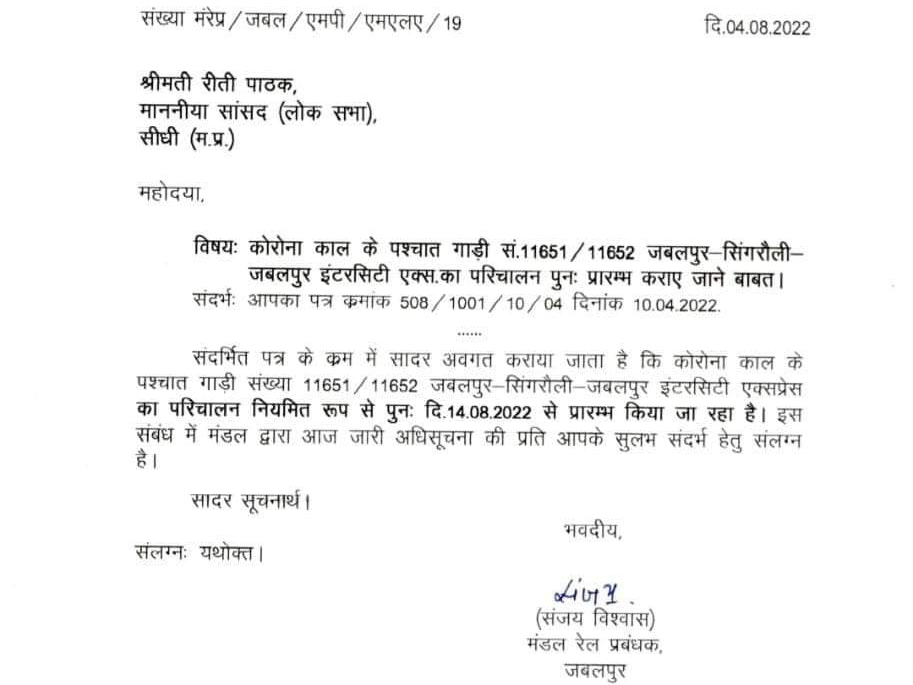 Following this, the green signal has been given to run Singrali-Jabalpur Intercity Express. People are happy to hear the news of the start of train operation as people are comfortable and this train will run daily.

According to information, Railways has given green signal for Inter City Express running from Singrali to Jabalpur. The Western Railway has issued a letter regarding the commencement of inter-city services from August 14. During the Corona period, Singrali-Jabalpur Intercity was also closed along with train movement across the country.

After the corona virus subsided, some trains started plying on important routes, but intercity operations were not started. Following this, the public has demanded that the inter-city trains should continue to operate. The Railways has given permission to run the train following the demand of the public. People say that running between cities will provide convenience to passengers and increase railway revenue.

Bhargwan Station Master said that the train will resume from August 14. It is said that the train will run in the old days. This train will leave Singrali daily at 4.40 and reach Jabalpur at 11.30 via Mahdeya, Bargawan, Saraigram, Niwas Road, Madhwaskram, Beuhari, Vijaychota, Mehrai, Khanna Panjari, New Gadni Junction, Gadni South, Chihora Road. On the return journey, it will depart from Jabalpur at 3.15 and reach Singrali Railway Station at 10.50.