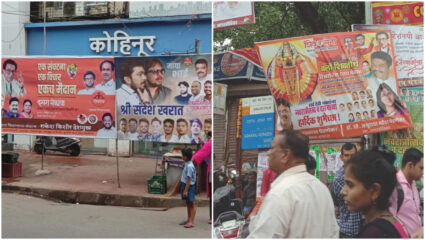 Mumbai: Both factions of Shiv Sena organized a Dussehra rally in Mumbai. At the rally, they hurled fierce political arrows at each other, but after the meeting, the mood in the city of Mumbai worsened. Be it Shivaji Park or the MMRDA ground located in BKC, the leaders of both the groups gave impassioned speeches to raise the spirits of the workers, but their gatherings were closely monitored by the police and the Awas Foundation.

A probe conducted by the Awas Foundation during the meeting revealed that Uddhav Thackeray’s speech had voices above the prescribed standard. Both groups bridged the city with banners and boarders, spoiling the weather and beauty. The PMC, which took action against the banners and boards, continued monitoring.

According to the Awas Foundation, the noise level of the rally at Shivaji Park in the quiet zone was 101.6 decibels, while the noise level of Eknath Shinde’s meeting in Bandra was recorded at 88 decibels. Kishori Pednekar’s voice recorded the most noise pollution in Uddhav Thackeray’s meeting. 97 decibels were measured during his speech. Loudspeakers were installed at Shivaji Park and PKC for the Dussehra gathering.

A Shiv Sena song was installed at Shivaji Park. An orchestra was organized by inviting various artists to BKC. Along with the song, many leaders have voice fluctuations with aggressive speeches. Shiv Sena vice-president Sushma Andare’s speech was not only better than other leaders but the volume during the speech ranged from 70.6 to 93.1 decibels. Uddhav Thackeray’s voice level was 88.4 decibels. MP Taisheel Mane’s speech level was recorded at 88.5 decibels.

Banners and hoardings were put up across the city by both factions for the BMC Dussehra rally. Apart from this, banners are placed on behalf of leaders on Navratri. Shivaji Park and near the MMRDA ground are covered with banners for the rally. It has spoiled the beauty of the entire city. Both factions of the Shiv Sena put up banners and boards at chowk junctions, major roads and bridges. It is the PMC’s responsibility to take action against these illegal banners. The PMC should have taken action against the parties and leaders who put up the banners on the orders of the Bombay High Court Supreme Court, but even after the second day, the banners were still hanging at the meeting venue. Illegal banners were put up across the city, but the BMC turned a blind eye. Without taking any action to remove the banner, PMC officials watched as spectators.