MP News: The Railways has suggested a nine-and-a-half-hour protest to stop the trainsAchi News 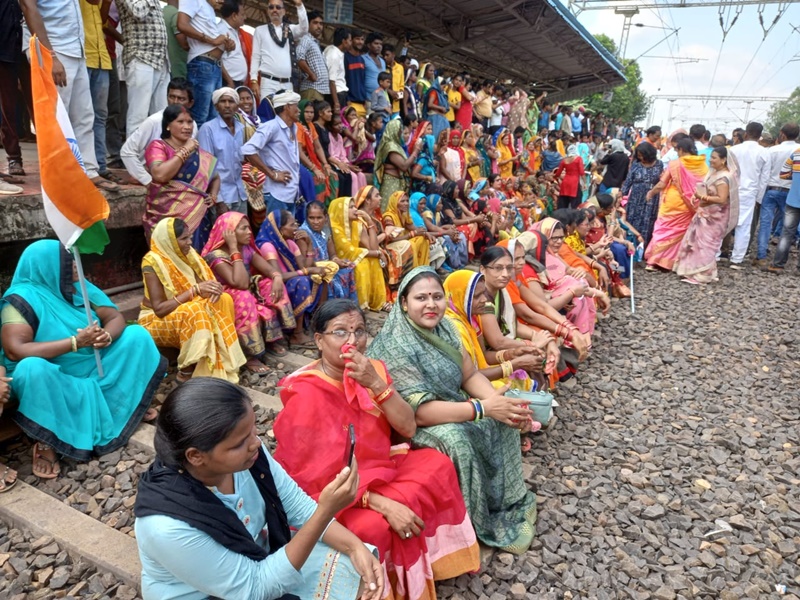 Umaria, New Zealand Rep. Umaria, New Zealand Rep. Regional Shankarsh Samiti and villagers occupied the track on the Gatni-Bilaspur railway section on Tuesday to stop trains at Sandia in the district. Thousands of people reached the railway track and froze for about one and a half kilometers. The protest started at 12 noon and continued till 9.30 pm. Collector Sanjiv Srivastava and Railway Zonal Business Manager Vikas Kumar Kashyap held talks with the protestors. Following this, the Divisional Commercial Manager assured the protesters in writing that a proposal has been sent to the Railway Board from Bilaspur zone to stop five trains. Soon these trains will stop at Sandhya railway station.

The procession started from the Chowk

Mithilesh, who had been discussing discipline with the protesters since morning, suddenly collapsed on the platform after reaching the station from Bayasi Garhi Chowk. However, he regained consciousness after some time and resumed leading the movement with full vigour. Mithilesh Payasi, who was on the stage, appealed to everyone every minute to carry out the movement in a peaceful manner and to accept our demand only following Gandhian principles.

This is the request

At Sandhya railway station of the district, there has been a continuous demand to provide halt to all trains which were stopped earlier. When trains were stopped during Corona, Sandia station was also affected, but when the trains started running again, all those trains stopped at Sandia station, which was earlier stopped here. Even the Narmada Express stop is not given at Sandhya. In the midst of this protest, the Narmada Express stop was started, but the train was stopped again on the second and third day. The Sankarsh Samiti, which has been protesting since September 5, has repeatedly requested the railway authorities to meet their demands and fulfill their demands. For the protesters..

Food on the railway

After seizing the railway tracks, Sandhya people sent home-cooked meals to protesters across the district after one o’clock in the afternoon. The protestors served food from the homes of those sitting on the railway tracks. Apart from this, the protesters provided food to the policemen and RPF personnel who were engaged in security arrangements and took full care of them.

Before reaching Sandhya station, the railway halted the passing trains at stations on both sides.Some trains halted at Rupat station and some at Lodha station. However, there was only one passenger train, and there were freight trains, which stopped at stations on either side for safety. The train stopped across the tracks. The protestors who sat on the railway tracks made only one demand that all the trains that used to stop here should be halted at Sandhya railway station.

The protestors sitting at the railway station also arranged for a folk song. People coming from rural areas call the railway management in karmic fashion with tholak manjira on the 3rd platform and listen to their words for help. He was traveling locally.

RPF and police at every corner

Police force and RPF personnel were deployed in every area of ​​the railway station in view of the warning of Sankarsh Samiti protesting on the railway line due to stopping of trains at Sandhya. The railway station became a police cantonment. Apart from site number 1, 2 and 3, RPF soldiers were stationed for a distance of about one and a half kilometers in both directions. Senior DSC Dinesh Singh Tomar and AC Vivek Sharma have said they are ready for every move by the protesters. The RPF jawans were instructed not to take any slack and not openly lathi charge if there was a lathi charge, while the RPF could not face the insurgents.

The entire city was shut down

Sandhya Nagar Market is completely closed. Every part of the city was engulfed in silence. The townspeople were sitting in small groups in front of the shops. Part of the insurgents’ strategy may be to not reach the operational base together. In the city’s Garhi Chowk, a group of agitators called on the people of the city to participate in the movement. As all the shops in the city were closed, people struggled to even drink tea.

Every house in the city is associated with this movement. The townspeople had prepared food in their homes for the villagers who came from far away. Food packets were prepared from every house and sent to the protestors. Food parcels are being sent from every house in the city, said Mitlesh Payasi, who leads the protestors. Somewhere they give 10 packets, somewhere 50 packets and some even 100 packets. Through this, more than 20 thousand food packets were collected.

15,000 people from 80 villages staged a rail strike at Sandhya and occupied the track to stop the trains.#Sandia Road Railway Station#Umaria#MP pic.twitter.com/IYSl2dqdfp