Don’t believe in revenge, otherwise many CPM leaders would have been in jail – Mamata slams CPM.Achi News 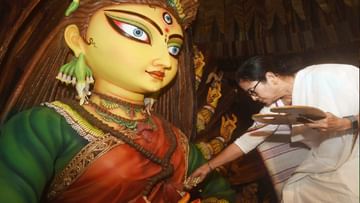 West Bengal Chief Minister Mamata Banerjee on Sunday said that she does not believe in revenge politics, otherwise there are sufficient reasons to send some CPI-M leaders to jail after coming to power in the state.

Chief Minister of West Bengal A mother’s love Banerjee said on Sunday that she does not believe in revenge politics, otherwise there are enough reasons to send some leaders of the Communist Party of India-Marxist (CPI-M) to jail after coming to power in the state. Banerjee, who launched a festive edition of Trinamool Congress mouthpiece ‘Jago Bangla’, also referred to social media trolling and alleged that outsiders were used to spread propaganda about the state.

“When I go to Delhi, I feel ashamed to know how some people are spreading lies to defame Bengal and defame the state,” he said.

The Chief Minister said that they could not digest the recognition and achievements of their government. Taking a dig at the opposition CPI(M), Banerjee said she does not believe in revenge politics. “Everyone is bad in Trinamool, everyone is good in your party (CPI-M)? Don’t blindfold yourself so much. He said some goons are defaming Bengal, give them bullets but they get angry when they try to defame Bengal.

Road in Kolkata to be named after Pranab Mukherjee

Mamata Banerjee on Sunday directed Kolkata Mayor Firhad Hakim to rename a street and garden in Kolkata after former President Pranab Mukherjee. Mamata Banerjee remembers Pranab Mukherjee while inaugurating the Chetla Agrini Durga Puja pandal in South Kolkata. “I asked Babi (Firhad Hakim) to name a small garden and a road in memory of Pranab Mukherjee (after him) even if the road is short,” he said. He also remembered singers Sandhya Mukhopadhyay, Dwijen Mukhopadhyay and Nirmala Mishra and asked the mayor to name streets and gardens after them. Mamata Banerjee said this year’s Durga Puja festival has two unique features: Untouchable Cultural Heritage by UNESCO and Best Place for Culture by the World Travel Writers’ Organization.