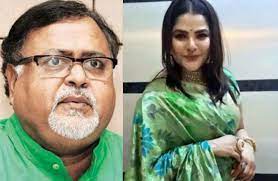 Puber pen, webdesk: Partha Chatterjee and Arpita Mukherjee underwent physical examination at ESI Hospital today after routine examination. The hospital premises were kept under tight security. Meanwhile, in response to the questions of the journalists, Arpita said, “What I have given to the ED of Bayan Dewar.”

On the other hand, journalists repeatedly asked Partha Chattopadhyay, who did the conspiracy you said? What has this conspiracy assigned? But Parth remained silent in the face of journalists’ questions. He did not answer anything.

It is to be noted that Arpita Mukhopadhyay, an acquaintance of Partha Chattopadhyay, was arrested by the ED officials on July 23 due to inconsistencies in the statement. According to sources, the ED officials decided to arrest him as he was not satisfied with the interrogation.

Arpita Mukherjee told the media after her arrest that she did nothing. This is BJP’s conspiracy. This is BJP’s move. That’s all I can say. ED searched Arpita Mukhopadhyay’s residence in Talliganj on July 22. 20 crore rupees were recovered from there. Later more money was recovered. Arpita was arrested in a flat in Talliganj. ED officials conducted continuous interrogation. Later Arpita’s other flats were searched and a total of Tk 50 crore was recovered. The ED has yet to get a satisfactory answer from the two as to where the money came from.

ED’s lawyers said that the two will be taken to jail custody and interrogated on their behalf. They will go to the jail and ask for interrogation.